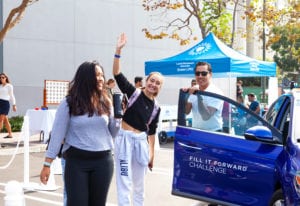 The campaign introduced students to the technology that powers Hyundai’s line of alternative fuel vehicles.

Climate change and environmental sustainability are hot-button topics that marketers can’t ignore, particularly when it comes to engaging younger generations. It’s a fact not lost on Hyundai, which on Nov. 22 wrapped its Fill it Forward college marketing campaign, part of its broader Drive the Future: A Hyundai Experience initiative. The program, which promoted water sustainability across three California-based campuses, was right in the automaker’s wheelhouse—Hyundai’s Nexo fuel-cell vehicle is the world’s first hydrogen-powered SUV, meaning water is the only emission it produces. The centerpiece of the campaign was an app-based water sustainability contest among the three schools, supplemented by on-site activations and events. The winning university, announced Nov. 29, received a $100,000 grant for its Office of Sustainability.

Students (and faculty) from Pepperdine University, Loyola Marymount University and Santa Clara University served as the competitors. During the launch of the campaign on Nov. 4, all participants received branded water bottles and scannable, university-specific tags, connecting them to the Cupanion Fill it Forward app. The concept was simple: as contestants refilled and scanned their water bottles (rather than using single-use bottles), the app tracked the number of entries. An in-app leaderboard kept things competitive, and participants were encouraged to post on social media with the campaign hashtag (#FillitForwardLMU, #FillitForwardPepp, #FillitForwardSCU) when they filled up. The school that ultimately raked in the most scanned refills, Santa Clara University, won the grant (and yes, parameters were in place to prevent cheating). The best part? Every time a participant refilled and scanned their water bottle, a cup of clean water was given to someone in need, and water-based projects around the world received funding.

As part of the campaign, students were tasked with finding effective ways to promote the app challenge across their respective campuses.

“We challenged them to figure out how to merchandise and market this on their campus, and how to communicate with students and faculty,” says Erik Thomas, senior group manager-experiential at Hyundai. “I think what’s very interesting is you’re seeing who communicates well and whose plan worked out well against the others… We gave them a set pool of certain resources and funds to do everything from online advertising to putting up displays. Some had donuts for the day coupled with ride-and-drives. Some chose not to utilize the shuttle services. They all chose what they thought made most sense on their own campus.”

Beyond promoting water sustainability, one of the objectives behind the Fill it Forward campaign was to introduce students to the technology that powers Hyundai’s line of alternative fuel vehicles, from everyday hybrids to the Nexo fuel-cell. So the automaker literally placed undergrads in the driver’s seat at their respective campuses through ride-and-drive events. The experiences were designed to illustrate how sustainable vehicles benefit the world at large, as well as on a personal level, particularly in California, where residents often can’t see beyond 100 feet as a result of smog.

Hyundai also timed the Fill it Forward program to align with the kickoff of the universities’ basketball season in order to meet students where they were and engage them through sustainable tailgating experiences. Additional program touchpoints included student waste art exhibits, complimentary campus shuttle services and surprise-and-delight moments during which prizes like backpacks made from recycled materials were awarded to weekly and daily scan leaders.

The impact of the Fill it Forward challenge is already evident. The three schools have racked up more than 70,000 refills, which equates to 432 pounds of plastic and 2,160 pounds of waste diverted from oceans and landfills.