The allure of the pop-up has permeated a new industry: the music biz. Artists from Slipknot to Madonna are leveraging pop-ups to hype new tours, engage fans and push merchandise in an era when album sales are no longer a musician’s bread and butter. Some feature brand partners, many include interactive experiences and virtually every genre of music has been covered (look no further than this pop-up dedicated to Johann Sebastian Bach). For some experiential inspiration, take a look at the following steal-worthy pop-up strategies inspired by the modern music industry.

How’s this for a strategy: On the same day his sixth studio album, “No. 6 Collaborations Project,” dropped, Ed Sheeran opened 32 one-day pop-up shops across the world from precisely 3:06 to 9:06 p.m. Exclusive, album-inspired T-shirts, hats, hoodies, vinyl records and other items created by streetwear brands Chinatown Market, KidSuper and Rhude were all available for purchase. A dj spinning the new album was also on-site while attendees were invited to say “thank you” to the singer on a giant chalkboard, and to participate in a green screen photo op featuring a full-sized cardboard cutout of Sheeran.

The late rapper Malcolm James McCormick, better known as Mac Miller, passed away in 2018, but his memory lived on Jan. 17-18 thanks to pop-up events in Pittsburgh, Los Angeles and New York City. Timed to the release of his posthumous album, “Circles: Til Infinity,” the events served as museum-style experiences where fans could get a closer look at the artist’s life—and they showed up in droves. The venues were at capacity from opening until closing each day, with lines averaging three to six hours in all three cities. Each pop-up featured a multimedia fan art exhibition, a gallery, exclusive artworks and merchandise, an intimate living room listening experience where attendees could hear “Circles” in Ultra HD, and a chance for fans to leave digital notes. All net proceeds from merch sales benefitted the Mac Miller Fund, an organization that supports young musicians. Agency: Mirrored Media, Santa Monica, CA. 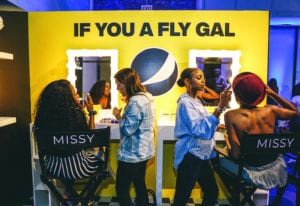 Missy “Misdemeanor” Elliott has become a music icon, recently earning the Michael Jackson Video Vanguard Award at the MTV Video Music Awards. To commemorate the honor and promote the release of her first album in 14 years, the artist teamed up with Pepsi and MTV to produce a “Museum of Missy” pop-up in New York City. The interactive museum experience featured exhibits honoring Elliott’s work, along with the creatives behind some of her most iconic music videos, like “The Rain (Supa Dupa Fly)” and “Sock it to Me.” Attendees could get their nails done like a “fly gal” (a reference to Elliott’s song “Work It”), pose as Elliott for countless photo ops and GIFs that recreated classic moments from her music videos, sip on themed cocktails infused with Pepsi products, apply face jewels and view art installations. Tickets to the museum sold out in under a minute. Agency: BMF, New York City. 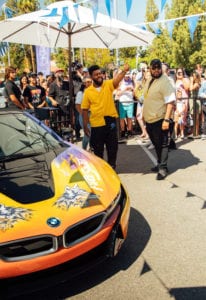 With his sights set on balancing “Instagrammable moments and a tangible item” Khalid promoted his sophomore album “Free Spirit” with a pop-up shop created in partnership with BMW during this year’s Coachella Valley Music and Arts Festival. The contemporary soul artist (and BMW driver) helped the automaker outfit an assortment of its vehicles to match the aesthetic of his album cover, which features flames and a wolf, ahead of the event.

During the festival, the “Pit Stop” pop-up offered limited-edition merchandise, a look at the fleet of “Free Spirit”-inspired BMWs and Khalid’s own restored ’70s-era van, which was also designed to match the album cover. In addition to shoppable merch, the pop-up experience featured a claw machine that gave fans a chance to snag exclusive Khalid bandanas (which could be custom embroidered on-site), food trucks, games, music and, on one afternoon—a visit from Khalid himself. Agency: Mirrored Media, Santa Monica, CA.

To celebrate her debut album and give fans a glimpse into her creative process, Billie Eilish teamed up with Spotify to deliver a pop-up in Los Angeles described as an “enhanced album experience.” For three days, fans got the rare opportunity to explore synesthesia, a condition Eilish experiences, in which a certain sense, like sight, triggers another sense, like smell, simultaneously. To get an idea of how the condition manifests itself, attendees embarked on a multisensory journey dubbed the “Billie Eilish Experience,” with all of the 14 rooms featured in the pop-up dedicated to a track from the album. 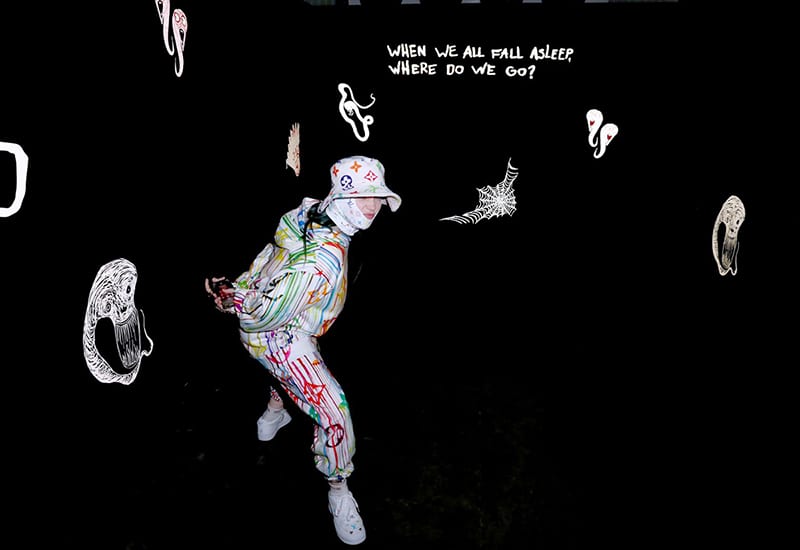 Each space gave fans an immersive peek into Eilish’s mindset as she was creating the songs featured on “When We All Fall Asleep, Where Do We Go?” Among experiences: In the “all the good girls go to hell” room, attendees found themselves surrounded by LED flames and burning floors; the “8” room featured playful puppies that could be fostered through the Eilish-supported dog rescue Marley’s Mutts; “bury a friend” invited attendees to climb under the singer’s bed (a replica of the one featured on the album cover) and uncover hidden invisible ink messages; and the world of “you should see me in a crown” was brought to life as fans crawled through a web to get to the spider’s lair where they encountered cold chains and videos of spiders, as well as the Murakami crown from the music video. Shiver.

To celebrate the 50th anniversary of its hit album “Tommy” and promote an upcoming performance at Wembley Stadium in London, The Who opened a two-day pop-up shop called The Who @ 52, a reference to the store’s location at 52 Brewer Street. The pop-up featured rare and archived memorabilia, exclusive band merchandise, signed copies of the new album “Tommy Orchestral,” a ticket offer to the Wembley show and a “world exclusive” seven-inch vinyl edition of “Pinball Wizard.” The Who @ 52 also invited fans to participate in a “Pinball Wizard Challenge” on the store’s life-sized “Tommy” pinball machine, and to hear lead singer Roger Daltrey speak about the band’s history on opening day.

Taylor Swift’s recently dropped album “Lover” includes a lyric about British fashion designer Stella McCartney, who the artist met at one of her London concerts. The duo decided to collaborate on a new clothing line, which was featured in August at a pop-up dubbed the “Lover Experience” in New York City. The shop, created in partnership with Capital One, aimed to both promote the new album and showcase the “bold and colorful celebration of friendship and the things that they both love.” Items from the collection included tie-dyed tees, sweatshirts, airbrushed jackets, totes and a reusable water bottle. The pair also teamed up on two limited-edition Stella McCartney pieces: a bomber jacket made from sustainable viscose (selling for a cool $1,995) and a logo handbag. In addition to shopping, fans could pose for dreamy, “Lover”-inspired photo ops, like a pastel-colored British phone booth installation, while Capital One customers were treated to a “cardholder-only” photo moment. The artist herself even made a surprise appearance, sending fans into a tizzy.

Cardholders—pick up exclusive merch + a guitar pick at The Lover Experience Taylor Swift ? pop-up shop in NYC all weekend!#StellaxTaylorSwift ? pic.twitter.com/UOMaMjCs2E

On the heels of the hit music video for its song “Chlorine” featuring a stuffed animal-like character named Ned, Twenty One Pilots opened a pool-themed pop-up dubbed “Ned’s Bayou” in Columbus, OH, while in town for a homecoming show. Fans wandered down a street temporarily named Twenty One Pilots Boulevard on the way to the shop. Upon entering, they were immediately hit with the unmistakable aroma of chlorine, which permeated the entire experience. Touchpoints included a barrel light installation featuring the Ned’s Bayou logo, myriad screens on which Ned would appear then quickly vanish, limited-edition merchandise for sale, pool accessories used as décor and complimentary blue-colored “Straight Chlorine” lemonade beverages whipped up by local Columbus business The Roosevelt Coffeehouse. And then there was the Easter Egg that only the Twenty One Pilots superfans in attendance could decipher: The façade of the pop-up, along with some of the merchandise inside, read “Fine Pool Equipment.” The acronym “FPE” is a reference to “the few, the proud, the emotional,” a nickname for Twenty One Pilots fans. Nice. 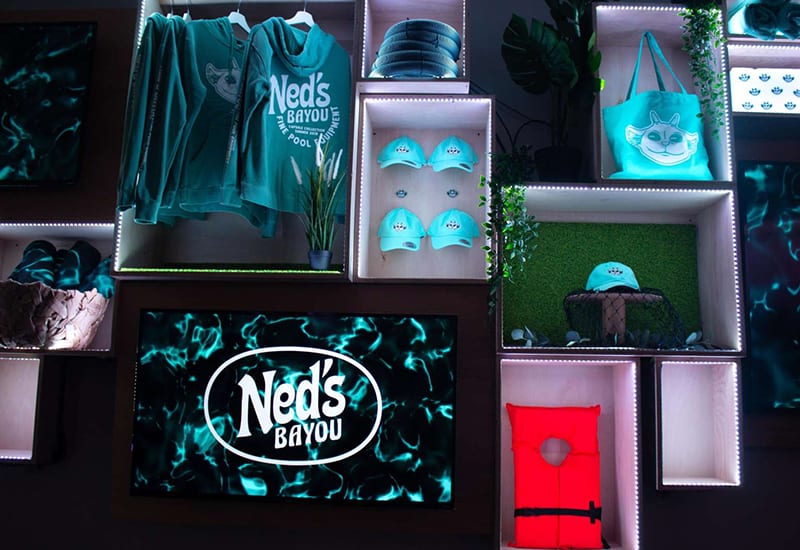