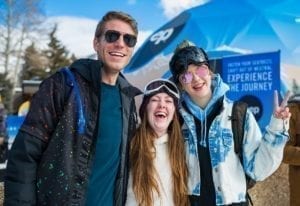 As a 17-year partner of ESPN and the Winter X Games, Jeep knows that the weather at the base of a mountain resort is predictable—predictable in the sense that it will be cold and there will be snow. For some brands, that might mean facing limitations on how a sponsorship is activated. But for the last two years, Jeep has pushed boundaries like the athletes do in the Games, and at the event this year, Jan. 23-26, in Aspen, CO, the brand hosted a high-tech, Jeep Wrangler off-road experience at Buttermilk Mountain.

Contained in a branded 30-foot dome that served as both a warming shelter and a stimulating visual in the X Games environment, the Jeep Champion of Adventure experience featured a 360-degree film viewed from 18 actual Jeep Wrangler Rubicon heated leather seats that were motion-activated with a rumble feature to enhance the viewing experience.

Once attendees were seated, an emcee introduced the film and talked about the off-roading capabilities of Jeep vehicles. Then, the four-minute film experience began, projected onto the interior façade of the dome, which placed viewers in the driver’s seat of a Wrangler as it crawled over boulders, climbed mountain trails, crossed a dry lake bed and cut fresh tracks across a California meadow. As the film progressed, the seats rumbled as the vehicle went over rocky roads, and the scent of pine and cedar wafted through the air. To highlight one of the Wrangler’s key features—the one-touch power roof offered on the Wrangler since 2018—attendees experienced blasts of air during certain scenes.

After the 360-degree film experience, consumers could check out the all-new 2020 Jeep Gladiator and Jeep Wrangler vehicles on display, enjoy warm Jeep-branded s’mores and enter their names to win Rossignol sports gear. Before they departed, attendees received a Jeep-branded keychain engraved with their initials. 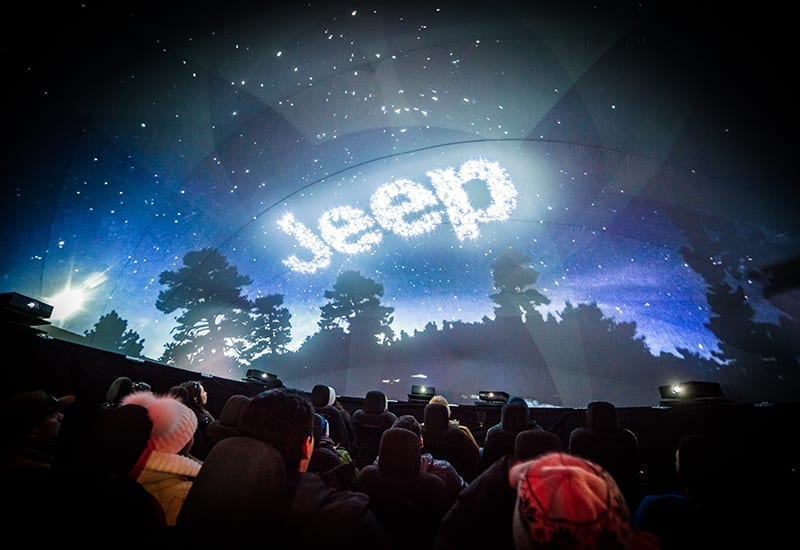 The four-minute film was projected onto the interior of the dome, which placed viewers in the driver’s seat of a Wrangler.

“What we’re always trying to do for the Jeep brand is find ways to get consumers into the vehicle and experiencing all it has to offer, which for some is off-roading, or others, daily driving,” says Jason Russ, head of experiential marketing at FCA US. “For the longest time we, frankly, had a static footprint [at the X Games] where we had some fun engagements, but they weren’t really moving the needle on getting people into the vehicles and experiencing Jeep, so that’s where the immersive dome experience came to light.”

Jeep was able to collect leads through RFID wristbands attendees received upon entering the space after registering with Jeep brand ambassadors. At multiple points in the footprint, they could “check in” with their wristband, whether it be at the entrance to the dome itself, at one of the vehicle displays after speaking with a product specialist, or cashing in a token for a s’more.

“We’re able to monitor the volume of people that come through, so we can collect good stats on the numbers and dwell time. It’s really an invisible experience to the consumer for them to know that, ‘Hey, we just want to check in here with you, at your speed, and do anything we can do to make your experience here at the Winter X Games more enjoyable,’” Russ says.

The film experience was about 15 minutes from start to finish, and with 18 seats available, Russ estimated that the brand would engage 2,300 consumers over the course of the Winter X Games weekend. Agencies: Inspira Marketing Group, Norwalk, CT; Lumen & Forge, Las Vegas (360-degree content). 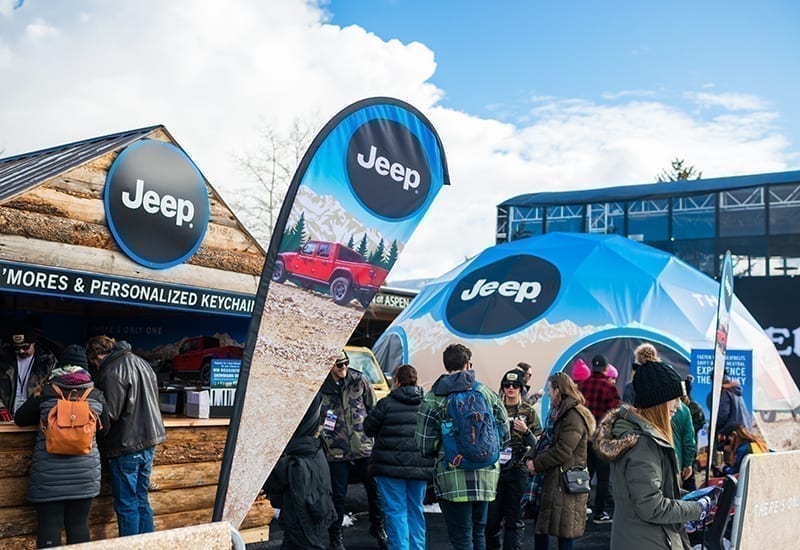 Before they departed, attendees received a Jeep-branded keychain engraved with their initials.