It’s not easy to attract the biggest names in the film industry to Park City, UT, in the middle of winter, but the Sundance Institute made it happen once again for the 2020 Sundance Film Festival, this year Jan. 23 through Feb. 3. The event, which serves as the largest independent film festival in the U.S., offered 12 days of panels, screenings and competitions, but festivalgoers were also treated to a variety of sponsorship activations that catered to the creative community. Here, we take a look at how some of the world’s top brands engaged attendees on the ground. Now, zip up your parka and grab a cup of hot cocoa. We’re headed to the mountains.

From the Sundance Archives:

Acura returned as presenting sponsor and official automaker of the Sundance Film Festival for the 10th year with a fleet of vehicles and its outdoor footprint, the Acura Festival Village. During public hours, the space featured daily live performances from bands and djs, including folk duo JOHNNYSWIM, an interactive photobooth, an installation showcasing the Acura NSX hybrid supercar, hot beverages and charging stations. Festivalgoers could also sip on Stella Artois and Bon & Viv, and take part in cocktail classes with Park City-based High West Distillery.

The village additionally played host to partner events and activations. Like the IMDB Studio featuring celebrity video interviews conducted by filmmaker Kevin Smith. There was also an invite-only premiere party for “Four Good Days” including a live performance and cast and crew appearances, and a ’50s-themed premiere event for “Sylvie’s Love,” with a host of live acts. Meanwhile, the Acura Stage was home to intimate panel discussions led by The Atlantic and The Wall Street Journal, featuring actors such as Anne Hathaway and Stanley Tucci. Throughout the festival, actors and filmmakers could also be found posing with Acura’s resident snowman, dressed as a film director. 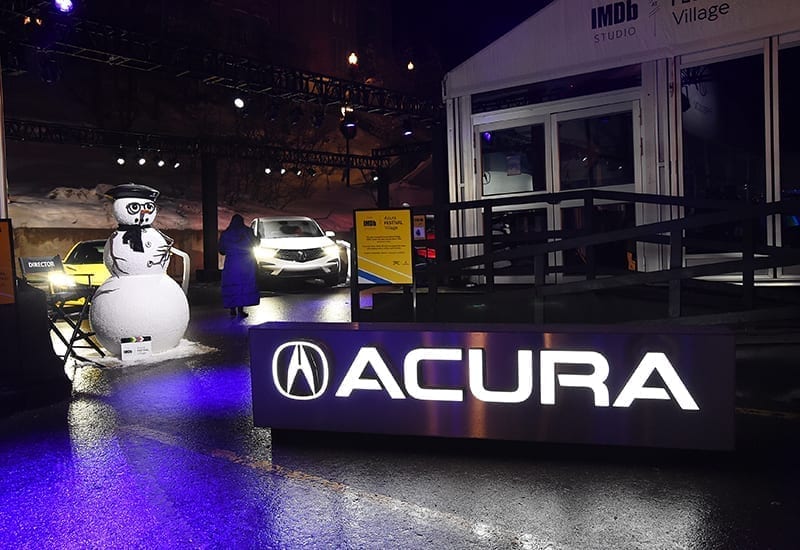 Inside the IndieWire Studio, sponsored by DropBox, Adobe activated a Bingo-themed interview series with an array of celebrities. Based on the turn of the Bingo cage, participants answered questions ranging from how they tap into their creativity to how they can help underrepresented communities enter the film industry. For every Bingo interview conducted, Adobe donated 25 scholarships to Sundance Ignite’s learning platform for aspiring filmmakers. 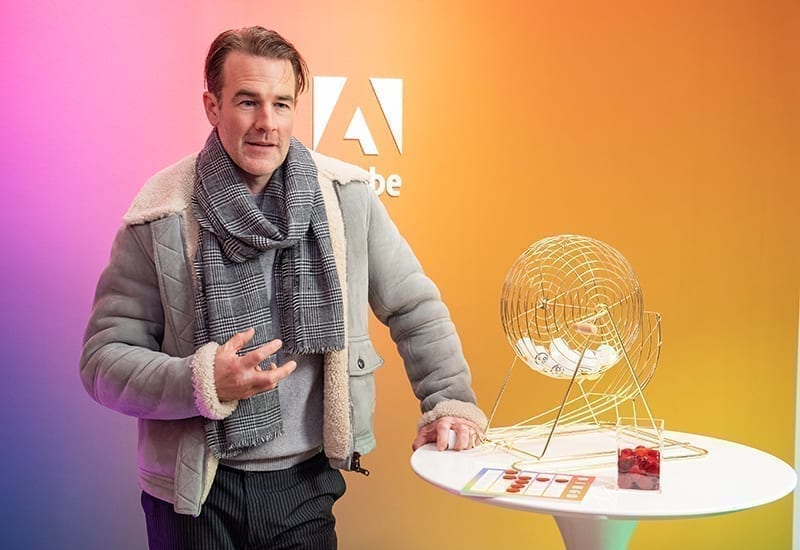 Audiobook platform Audible made its Sundance debut as the festival’s audio entertainment sponsor with the Audible Speakeasy experience, where stories were “stirred, shaken and spoken.” The Speakeasy featured panel discussions curated by the Los Angeles Times and fireside chats with creatives like Ron Howard and Rufus Wainwright.

Attendees were also invited to participate in 30-minute, reservation-only “sound baths” hosted by Sara Auster, a leader in the space. Participants were introduced to the art of sound meditation with guided instructions from Auster focused on breathing practices. Agencies: Civic Entertainment; The Hype! Agency (staffing). 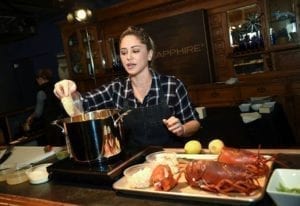 For the 10th consecutive year, Chase Sapphire delivered its Chase Sapphire on Main experience for both attendees and the general public for several hours each day of the festival. Touchpoints included cooking demos with chef Brooke Williamson, Taste of Sapphire dishes inspired by cities around the world, refreshments, charging stations, Chase ATM stations, arcade and table top games, and lounge seating.

Ahead of the public premiere of “McMillions” on Feb. 3, a six-part documentary about the McDonald’s Monopoly scandal, HBO gave Sundance attendees a chance to play a game that wasn’t rigged. The activation, held at the Rockwell Cocktail Lounge, took festivalgoers through an interactive journey that allowed them to dig deeper into the true story behind the $24 million scandal, and win prizes by literally peeling back the layers of a wall within the footprint. Prizes ranged from an array of nostalgic ’90s-era items to big-screen TVs to bicycles. There were also playful photo ops, like an oversized box of McDonald’s fries filled with cash, as well as a striking (pop-up) storefront that beckoned attendees to “enter and really win.” Agency: MKTG. 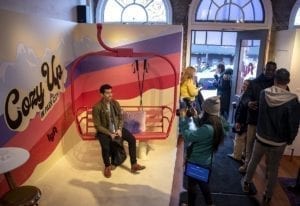 Over at the UTA house, Lyft introduced attendees to its LyftUp program, which addresses food inequality, via an intimate chat with chef JJ Johnson. (Fun fact: Prior to Johnson’s chat, a select group of creators and influencers dropped off food donations at the Christian Center’s food bank.) Johnson discussed the power of transportation to help families in need access healthy food, as industry influencers sipped cocktails and munched on fare whipped up by the chef, like Jerk Cured Rocky Mountain Trout and Crème Brulee French Toast. Agency: NVE Experience Agency. 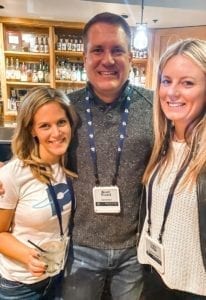 Soundings Connect, a network of freelance meeting and event professionals, leveraged Sundance to co-sponsor the first-ever Haute House, an event platform co-hosted by a collective of like-minded brands, each of which offers a product or service focused on powering human connection. Together with Proxfinity, Haute Companies and Cambio, the brand hosted event marketers from Dell Technologies, Warner Bros., Adobe, Amazon and beyond at the Sundance debut of the platform. The experience was designed to create a relaxing space for event professionals to learn about products and services that can augment human connection, both within their organizations, and at their events. In addition, to help refine networking opportunities, Proxfinity launched its CUE 2.0 wearable smart badge at the event, generating some interesting topics of conversation. Attendees equipped with the new badges were alerted when they had things in common with other participants, like greatest strengths and challenges, what makes them uncomfortable and even their designated spirit animals. The next Haute House event is slated to take place at South by Southwest this spring.

Media brand Vulture returned to Sundance for a fourth year with The Vulture Spot, presented by Fire TV. Inside the stylish, invite-only media studio, editors went all-in on content generation, interviewing and photographing 150 stars from some of the festival’s most anticipated films. But it was the partner activations that really brought the space to life.

Fire TV brought a hospitality suite to The Vulture Spot that featured a curated gallery of fan art from 15 countries celebrating the cultural impact of the film festival, and a custom wallpaper installation created by Deerdana that showcased the filmmaking and fan communities. The artist also created an Instagrammable public art installation encouraging attendees to make, and watch, what they love. 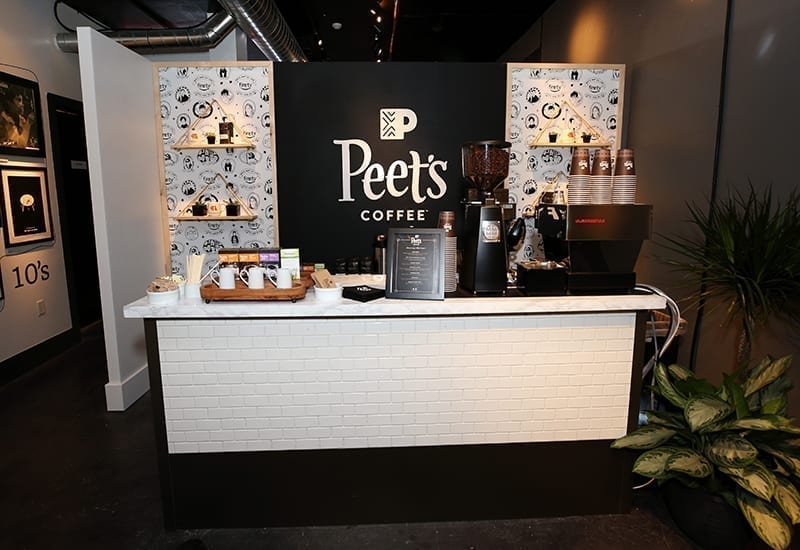 The post How Brands Served up Live-action Games, Lounges and Charitable Panels at Sundance appeared first on Event Marketer.