Sometimes, a billboard is too flat and a static car display doesn’t tell the whole story. To support the March 7 launch of its new, all-electric MINI Cooper SE, MINI transformed a proposed media buy into a live event program that took advantage of one of the brand’s top markets: Miami. Aligning with the lead up to the Super Bowl (though MINI was not an official partner), the MINI Presents: The Electric Stage treated consumers to three days of free performances in the heart of the city’s Wynwood arts district.

MINI collaborated with local foodie hot spot Coyo Taco and used its large and open parking lot to activate the program. Artists ranging from djs to electronic dance musicians performed both in and on top of a shipping container. When empty, the brand parked a MINI Cooper SE inside—placing the vehicle center stage. Installed over the shipping container was a large electric sign that read, “MINI Goes Electric.”

The “mini festival” was first come, first served, and attendees either stumbled upon each performance (by spotting the MINIs on display or by hearing the music), or they registered to attend on the Eventbrite platform. As consumers entered the footprint, they checked in at tablet stations and offered up some sign-up information in exchange for admission. Artists performed sets from 4 p.m. to midnight on Friday and Saturday, Jan. 31 and Feb. 1, and from 12 to 3 p.m. on game day. Included in the lineup was Canadian dj A-Trak, Miami dancehall producer and dj Silent Addy, and French-Canadian electro-funk duo Chromeo. Special guests as well as current MINI owners were invited to enjoy the sets from a VIP space adjacent to the stage.

In addition to the performances and food and beverage available for purchase, there were yard games like corn hole and giant Jenga for attendees to enjoy, and a digital photo activation mosaic they could contribute photos to. Attendees could also hop inside the parked vehicle to check out the specs and chat with product specialists.

“We were looking at different options of how to execute something visual with music, connecting electronic music with the vehicle,” says Brian DeAngelo, MINI brand communications manager. “The concept evolved into not just finding a billboard, or having music play, but creating a space that was like a living musical billboard.”

Over the course of the three days, MINI captured content it will leverage for digital spots and marketing campaigns as the launch of the MINI Cooper SE officially gets underway. Agencies: MAG, New York City (experiential and production); POD (creative); UM (Media); Rapport (OOH). 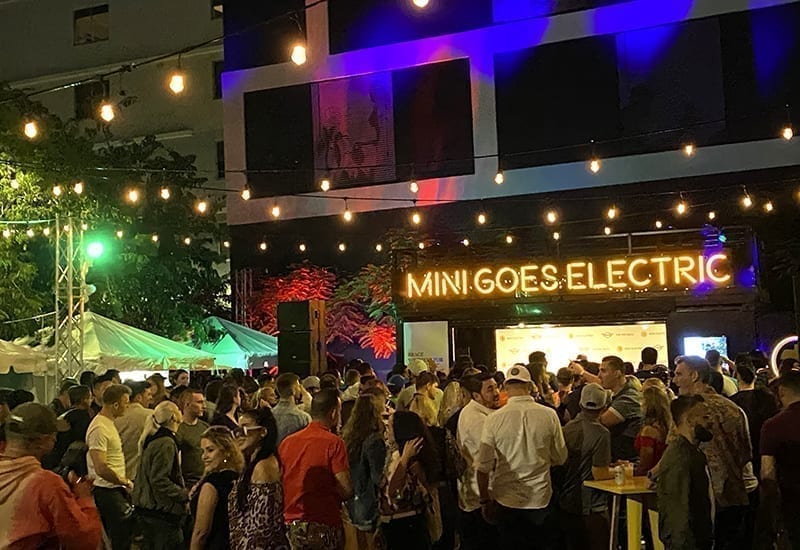 The post A Media Buy Evolves into a Live Event for MINI Ahead of its All-electric Launch appeared first on Event Marketer.